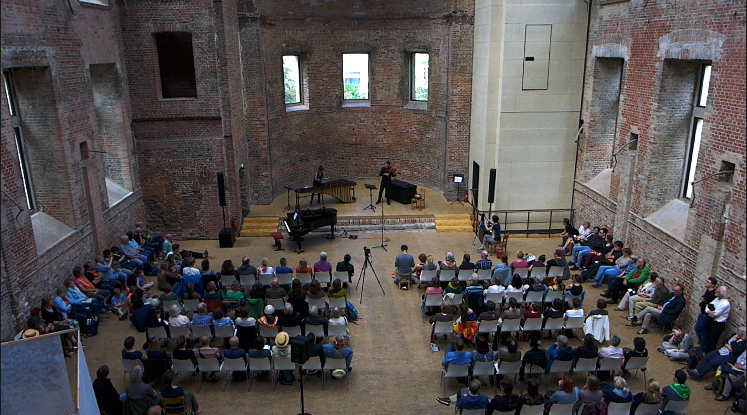 The Greek percussionist Evi Filippou and the South African all-rounder Gareth Lubbe were the protagonists of the second concert of the Face to Face festival in the Elisabethkirche as part of the German Evangelical Church Day 2017. The two artists were inspired by Karlheinz Stockhausen’s Tierkreis op. 41. The piece, originally composed for music boxes in 1974-75, consists of 12 melodies, each dedicated to a zodiac sign. Versions for further instruments and ensembles were added later, whereby Stockhausen asked the interpreters to add their own improvisations to the piece. An ideal scenario for Gareth Lubbe and Evi Filippou, who delivered an almost perfect concert in the virtuoso interplay of different instruments – viola, marimba, piano, voice and hand drums. In terms of incense we burnt initially some laurel, laurus nobilis the Latin name, a shrub or tree, up to 10 meters high. It is the plant of Daphne, the oracle of Delphi, the academics, the winners. In a seamless connection white sage followed, a herbaceous plant that has been used by priests, shamans and the common people for centuries, especially in North and Central America, on spiritual and profane occasions. Anyone who has already tried the fragrance and the effect knows why.